Mix it all together, and the next logical deduction equals = I love sugar cookies!! 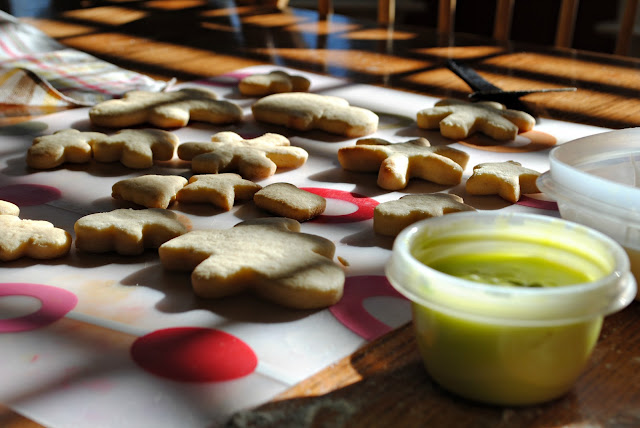 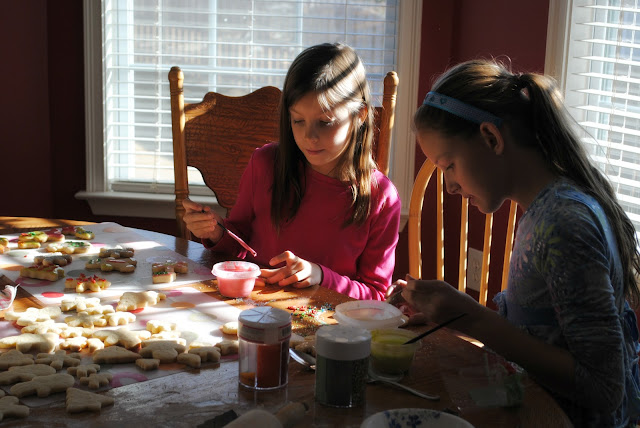 Simple to mix up, fulfilling to roll out, fun to cut, easy to bake, creative to decorate.  And that's before you even get to the eating!!  Sweet, tender, soft, chewy, and (with sprinkles or colored sugar) a little crunchy.  A world of delightful texture and taste.  Uncomplicated, unassuming, comforting.  Sugar cookies. 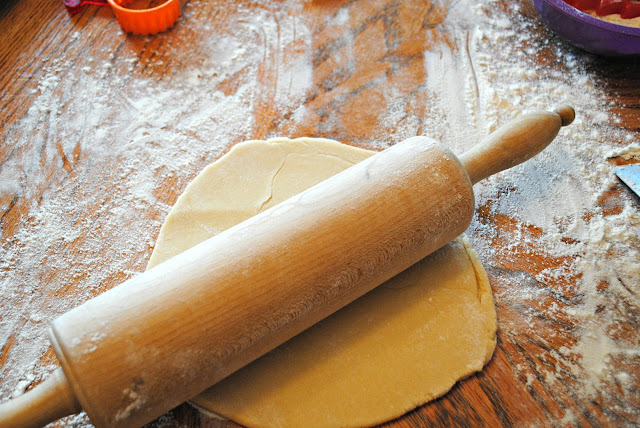 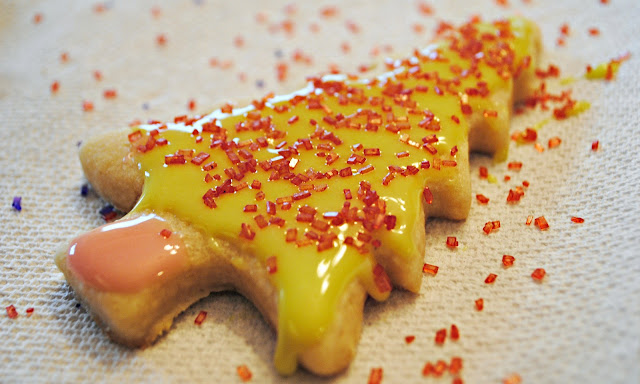 When this household suddenly went gluten-free, years ago, I thought sugar cookies were now extinct under this roof. 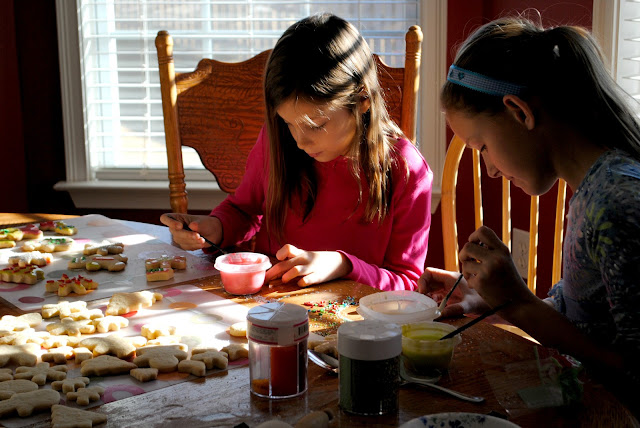 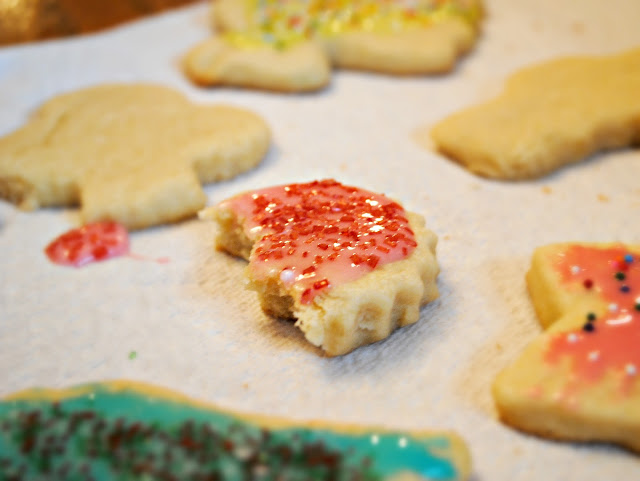 Trial runs with rice flours, and mixes incorporating bean flours of different types left us with unappetizing, thick, grainy, or heavy cookies.  You can only hide so much under a substantial layer of powdered sugar icing and sprinkles.  The experimental cookies usually sat neglected on the counter until they were so hard that I was doing us all a service by dumping them.  And yet again dumping the hope of a gluten-free sugar cookie that could be enjoyed. 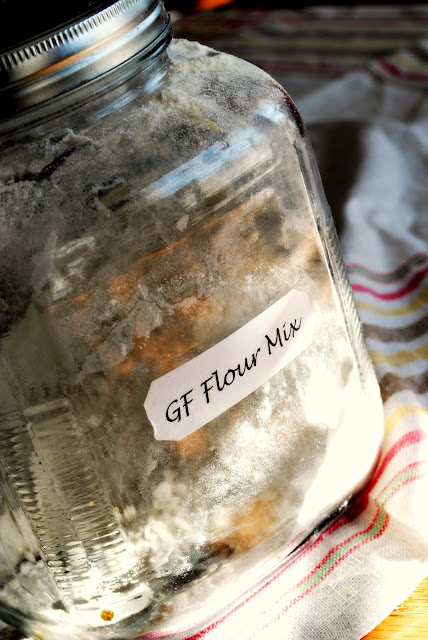 Enter the dear Silvana and her marvelous gluten-free flour mix that can be made right in your own kitchen (here).  Take a deep breath and exhale slowly.  It is more time-consuming to combine these flours; it is more costly to purchase these flours than the 5-pound bag of Gold Medal sitting on the market shelf.  However, this mix is gluten-free, and in cookie baking, the flour is a highly billed player!!  No compromises with the flour. 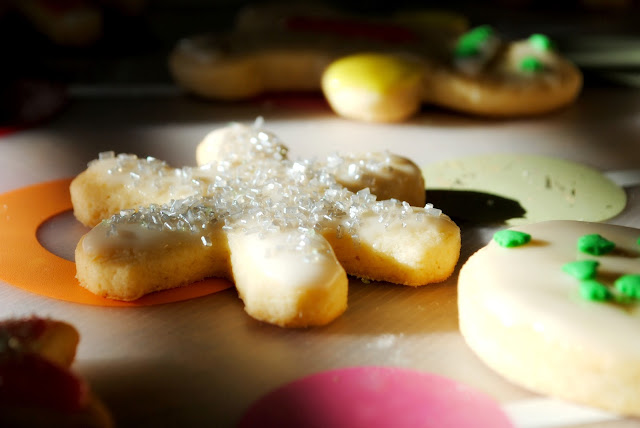 And so, this year we ended up with a chewy and delicious sugar cookie for the first time in years.  And if I ended up making 6 batches of these delights, I can hardly be blamed.

Mix the flour mix, salt and baking powder together.  Add to the first mixture and blend well.  Add more flour mixture if the dough is too soft.  Sprinkle flour mix on the rolling surface, roll cookies to 1/4 inch thickness.  Cut out shapes and back for 8-10 minutes at 350 degrees.

Stir powdered sugar and milk until smooth.  Beat in the corn syrup and vanilla until icing is smooth and glossy. If the frosting is too thick, add more corn syrup.  Divide icing into separate bowls and stir in food coloring as desired.

And in despair I bowed my head. 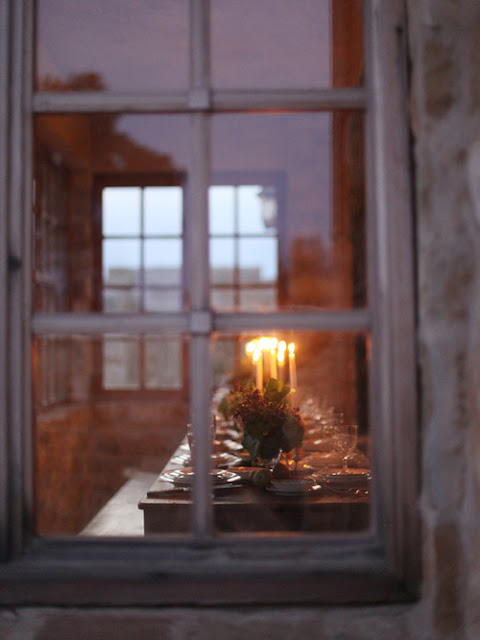 There is no peace on earth, I said. 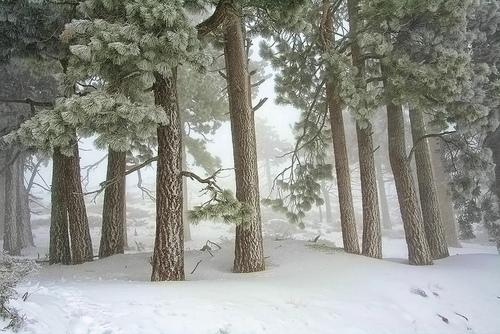 For hate is strong and mocks the song 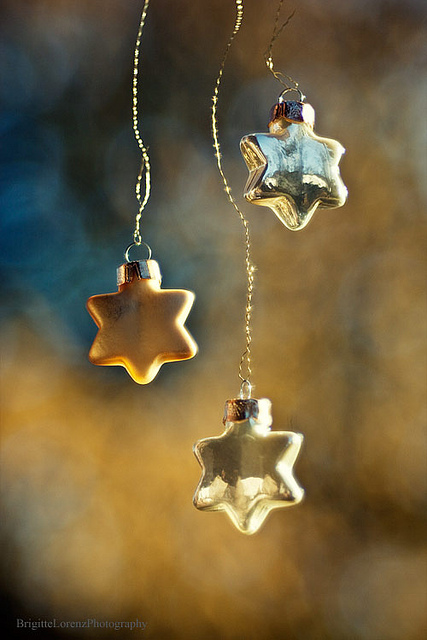 Of peace on earth, good will to men. 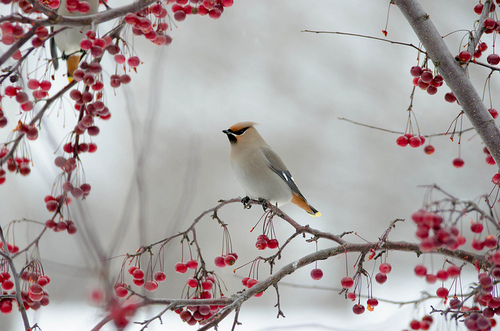 Then pealed the bells more loud and deep,
God is not dead, nor doth He sleep, 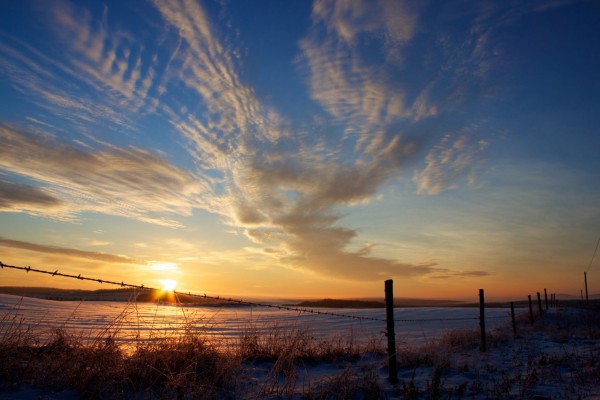 The wrong shall fail, the right prevail, 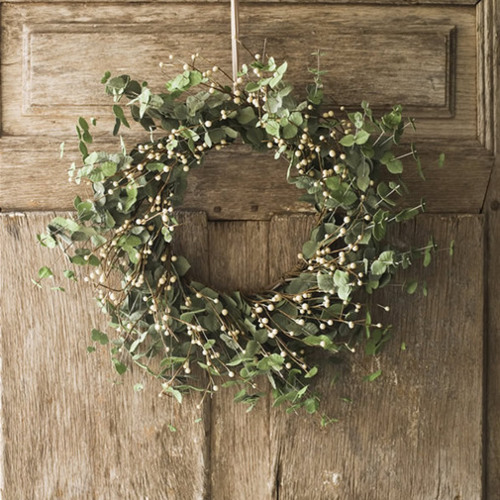 With peace on earth, good will to men! 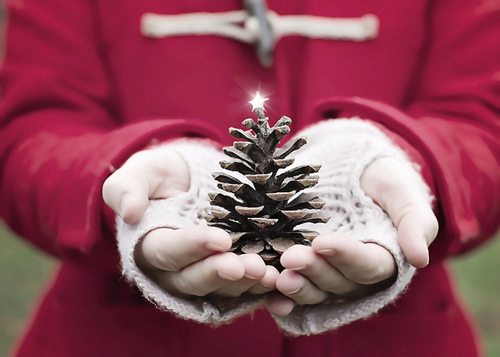 Merry Christmas to all and God's comfort to those who hurt at this Christmas season.


all pictures via a beautiful world
Posted by Shelley in SC at 12:32 PM No comments:

Christmas has been pretty sketchy around here this year.

Thanksgiving surprised me with its success and I rather think I have been insistent on standing in the kitchen and figuratively continuing to smell the turkey, while the calendar has been insistently dragging me toward December 25th. 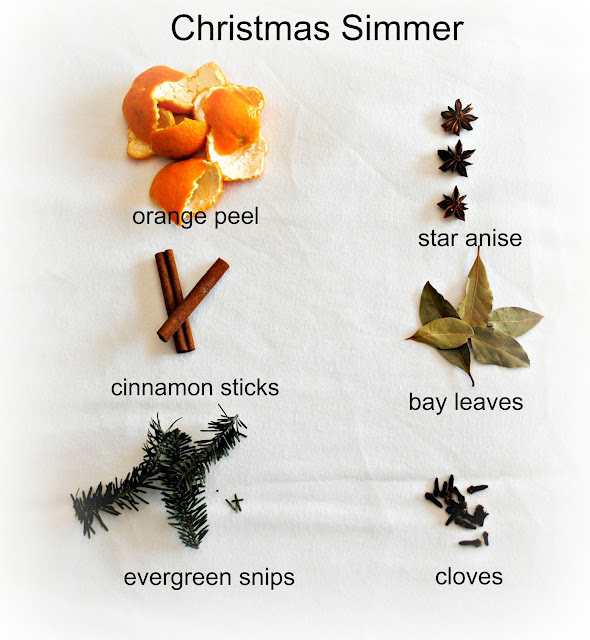 The holiday started off with my purchase of a 10 foot real tree instead of the 8 foot I purchased last year.  This immediately set all all manner of problems into motion as the ornaments were now a little sparse, the vintage paper chain I made last year can now only complete 2 revolutions around the tree, instead of the more eye-pleasing 3, and the golden lights from 2012 (because white were not to be found) now only made it 2/3 of the way up the tree.  Of course the stores that had no white lights to sell last year decided this year to purchase more white . . . and to skip the golden altogether.

And with that inauspicious beginning, Christmas prep has progressed on the same continuum. 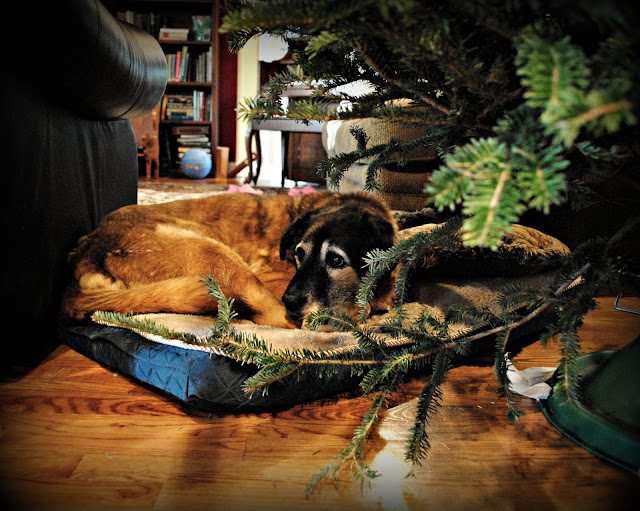 Yes, there are little touches of Christmas all around.  No one would miss the season entirely when walking through the house.  It just feels a little slapdash . . . a little wobbly . . . a little unsettled. 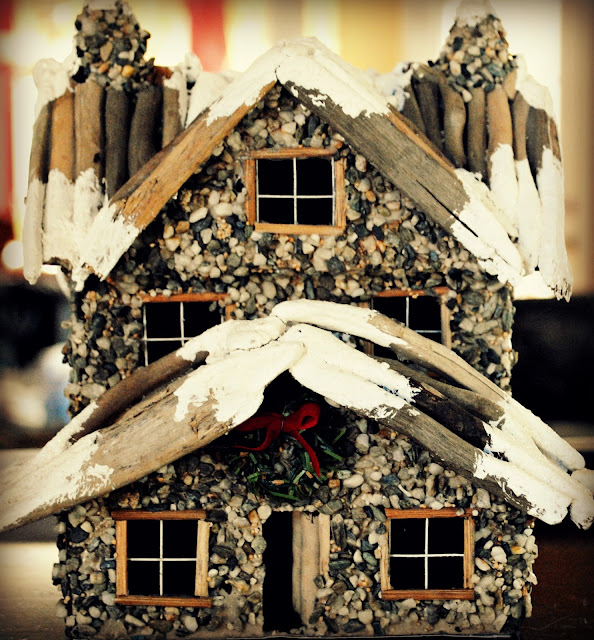 It did occur to me this Christmas, however, that if things seemed a little askew decor-wise, then at least the house should SMELL like Christmas!! 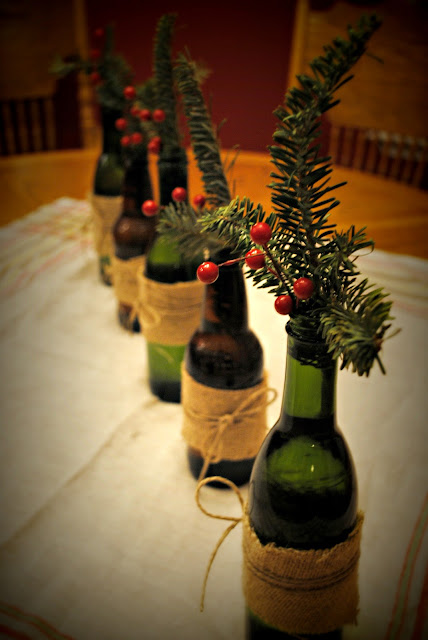 And, indeed, smell it has!! 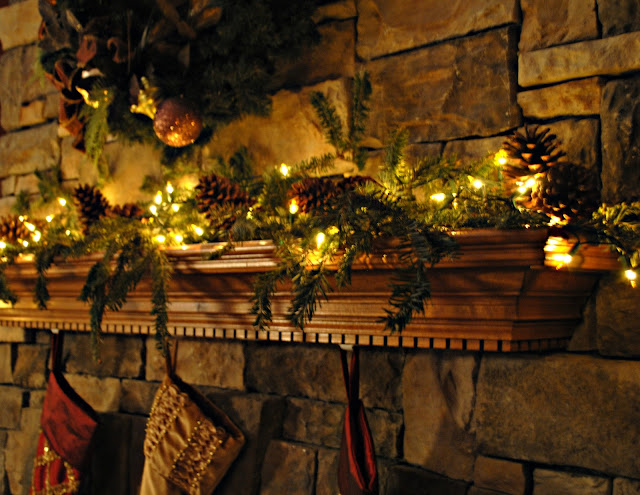 I've thrown peelings from sweet little mandarins, star anise, cinnamon sticks, bay leaves, snips of evergreens and cloves into a small saucepan of boiling water, and the next thing you know, the house has all the enchantment of a Moroccan street market.

Never mind that the tree stand is too small for the 10 foot tree or that 2 of the 5 stockings keep falling off the mantle or that I can't find the lights for the banister garland. 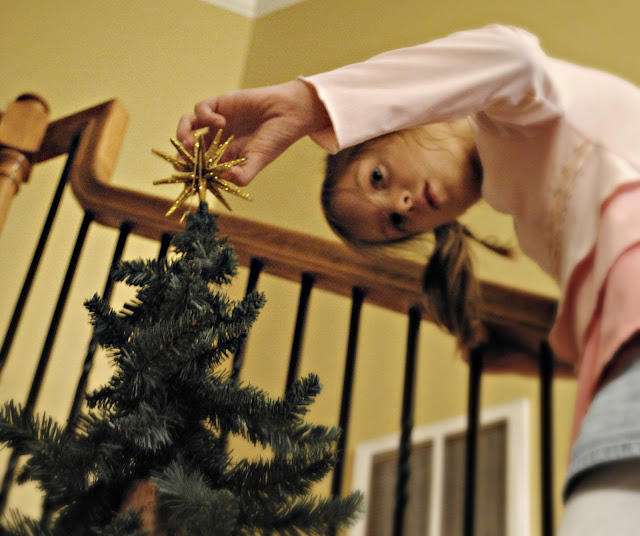 My house smells divine, and everyone entering is totally blinded to any imperfections by the heady fragrance of Christmas spice!

This Christmas may not make it into the annals as the most lovely, organized and well-planned, but no one can say it doesn't at least smell like Christmas!!

This year, it's Christmas Simmer all the way!


p.s. - Easy Cheat - just throwing some orange peel and sprinkling some ground cinnamon and ground cloves into the boiling water also works!!
Posted by Shelley in SC at 10:04 PM No comments:

On Friday, the sun shone, a slight breeze blew, the air was crisp and cool.

I had my to do list ready.  Things that weren't arbitrary.  Things like cleaning bathrooms.  Changing sheets.  Washing dishes.

Youngest Son suggested a walk in the woods.

I was torn.  A walk in the woods, breathing fresh air, drinking in nature.  Home responsibilities.

The walk it was.  Of course. 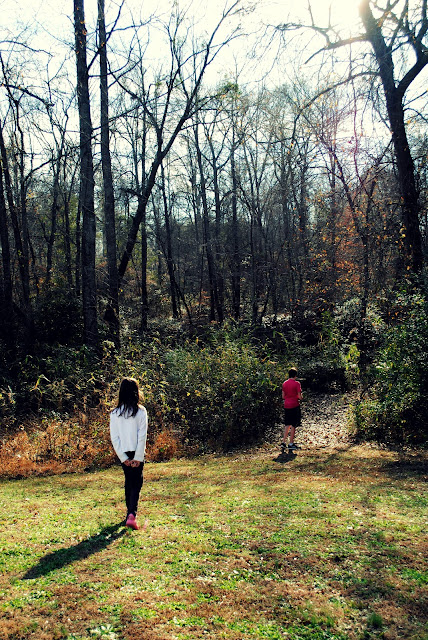 And we were off.  I was glad I made that choice the moment we walked out into the sunshine. 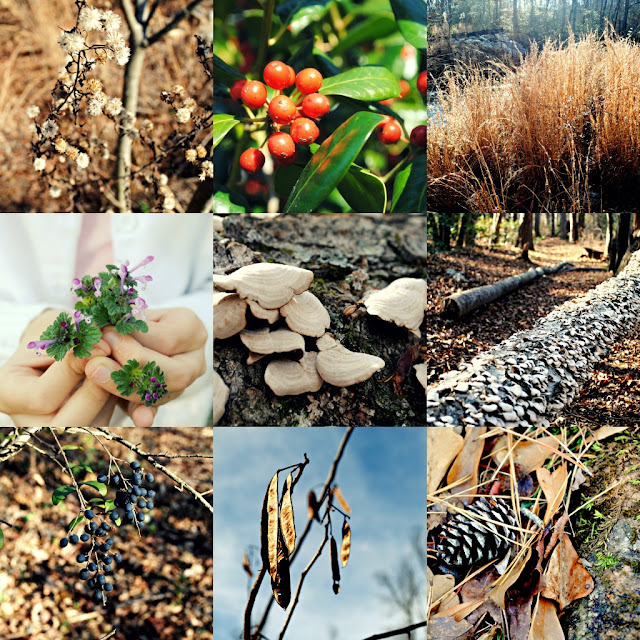 A delightful tangle of the woods in winter.

I love to watch Youngest Son in nature.

He is enthralled by it.  Senses slowly soaking it in.

And now that he has discovered the camera, his eye catches two bent trees making an "X" in the sky, the sun glinting on the surface of the creek, clouds leaving a fading trail as they puff across the sky. 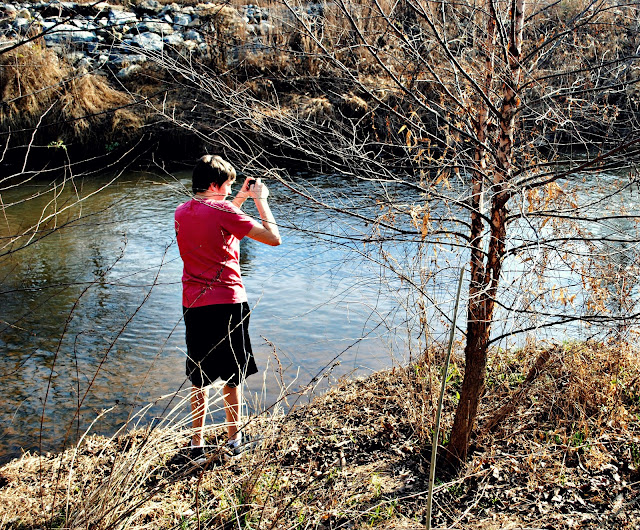 The woods enchanted us . . . transformed us from irritable children and overworked mom to co-conspirators  on a secret adventure.

I even saw Youngest Son offer to hold Youngest Daughter's carefully collected dandelion as she crossed the creek.

Proof of enchantment to be sure. 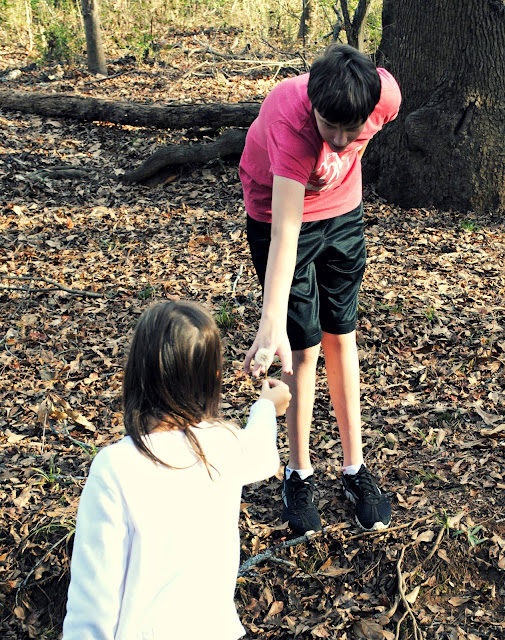 We trotted back to the house chattering about things found, things discovered, things captured on camera.  A buzz of talk inspired by the quiet beauty of winter woods.

The toilets, laundry and dishes waited.  I thought they would.

The yearly Christmas Party Dash occurs each year exactly on the day of my husband's annual Christmas party.

From the time the invitation arrives in the mailbox, the pesky question niggles around in my mind . . . what will I wear to the Christmas party?

An inventory of my closet shows a few skirts that are now outdated, a couple of summer dresses (purchased on Wedding Attendance Dashes), lots of jeans, and shirts that feel at home with jeans and at home within the four walls of my house.  Oh, and there is the black velvet Lanz of Salzburg dress that I wore 25 years ago to a company Christmas party and still can't part with.  Think Lady Diana.  Think '80s. 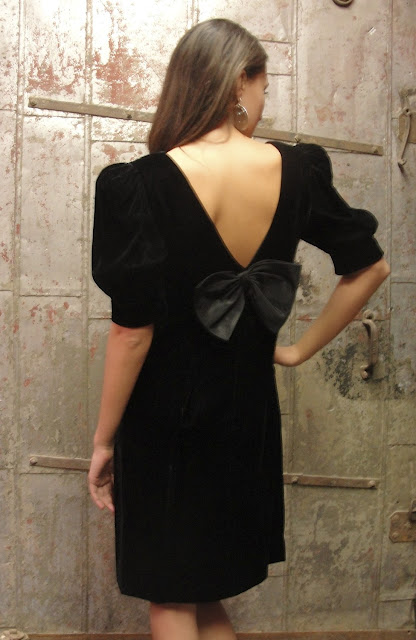 My closet does not show much of anything that is Christmas-party-worthy.

The ante was upped this year by the location of the Christmas party: 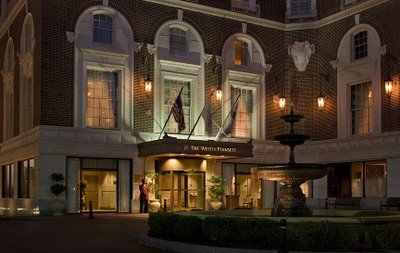 Upon awaking, I knew I had to do something about said problem . . . by 6:00 pm.  Around lunch time I started to mentally comb through my closet, thinking black, sparkly, or elegant.  At 2:00 pm I flat-ironed my hair, hoping that no matter what I managed to find for the neck down, my hair would "carry" the night.  At 3:00 pm I attended a real estate clothing.  At 4:00 pm I got serious and began the traditional Christmas dash.

T.J. Maxx, one half hour to spend.  Hit the dress rack.  Limited choice options.  Perfect.  Collect six options.  15 minutes left.  Hastily try on all six.  After first five are too short, too tight, too unflattering, too boxy, and  too matronly, breathe a sigh of relief that one works.  Nervously stand in line fidgeting with watch.  Checkout.  Perfect . . . 30 minutes on the dot. 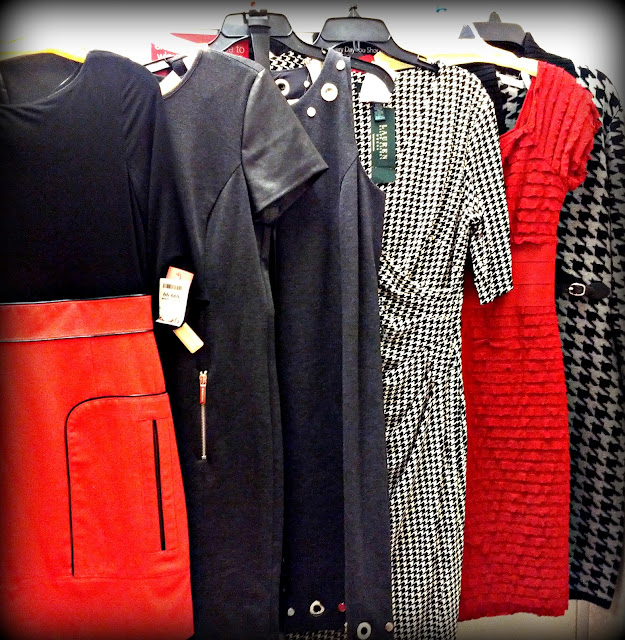 Get home.  Make dinner for kids.  Throw on new dress.  Silently congratulate myself on my pre-flat-ironed hair (a new development for me this year).  Zip up black leather boots.  6:00 . . . ready. 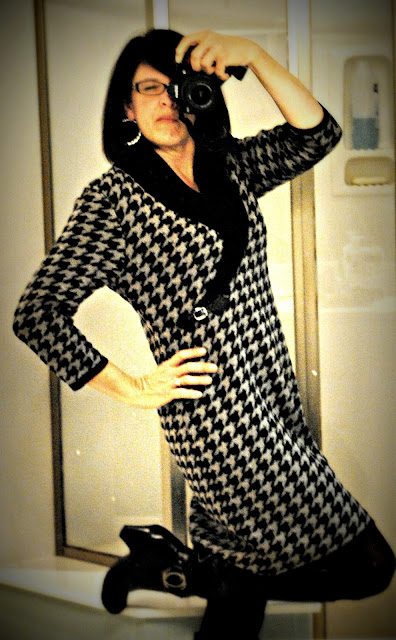 Skin of my teeth.  Another Christmas Party Dash successfully completed.
Posted by Shelley in SC at 6:56 PM 1 comment:

The Soup of My Dreams - Creamy Turkey Wild Rice

I've been searching for this soup recipe.

I didn't know it, but when I tasted it, I knew then that it was a soup recipe for which I have been longing.

I've tried others that were almost right . . . close to perfect . . . on the brink of delightful.  But this one is, for me, the end of the journey.  The journey to the perfect Turkey Wild Rice Soup.

Savory and fragrant, with the mellowness of wine, a rich touch of bacon, and the nutty chewiness of wild rice. 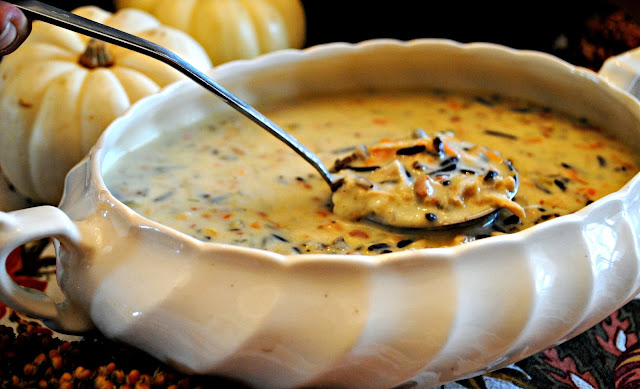 Thanksgiving was great.  And using my turkey leftovers to make this soup was the perfect way to end a sweet holiday.

I first read about my dream soup here.  Which then directed me here for the recipe.

Here, then, is the recipe, with a few of my changes noted:

Creamy Turkey & Wild Rice Soup
5 tablespoons butter (1 tablespoon for sauteing, 4 tablespoons for cream sauce)
1/3 cup diced celery (1/4" dice)
1/2 cup diced carrots (1/4" dice)
1 small onion, finely chopped (about 1/2 cup)
4 cups chicken broth (1 32-ounce carton)
1 cup water
3/4 cup wild rice
2 cups diced cooked turkey (about 1 pound) - my family said it needed more turkey
6 tablespoons all-purpose flour
1/4 teaspoon poultry seasoning - none on my spice shelf---I skipped it
1 1/4 cups half-and-half
2 tablespoons white wine (optional) - put in extra here.  yummmmmm!
3 slices bacon, cooked and crumbled - used turkey bacon . . . made me feel better about the half and half
1/4 teaspoon salt
1/8 teaspoon ground black pepper
Make the soup: Melt 1 tablespoon of the butter in a large stockpot over medium-high heat. Add the celery, carrots, and onions, sauteing until softened - about 5 minutes. Stir in the chicken broth, water, wild rice, and turkey. Bring to a boil; then lower the heat, cover, and simmer for about 40 minutes, stirring occasionally.
Make the cream sauce: Meanwhile, melt the remaining 4 tablespoons butter in a saucepan over medium heat. Mix the flour and poultry seasoning together in a small bowl and then add to the butter; cook for 1 minute, stirring constantly. Stir in the half-and-half and cook until slightly thickened - about 1 minute. Stir the sauce into the soup. Stir in the white wine, bacon, salt, and pepper. Serve.
Posted by Shelley in SC at 9:06 AM 2 comments: