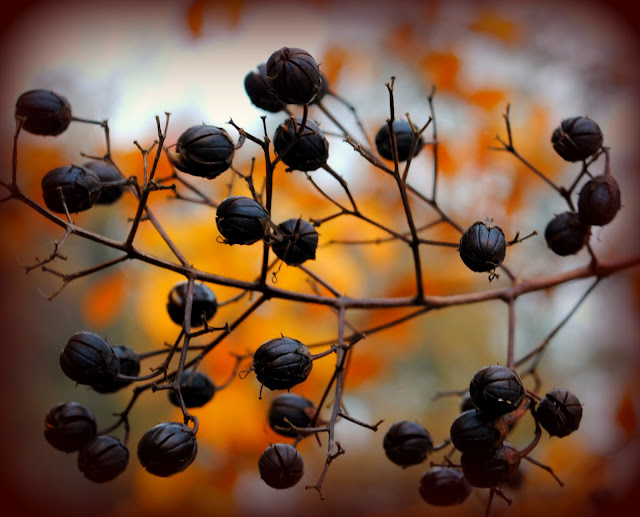 It is good to praise the LORD
and make music to your name, O Most High,
proclaiming your love in the morning
and your faithfulness at night.
Happy Thanksgiving to All My Bloggy Friends!!
Have a Wonderful Day.
Posted by Shelley in SC at 11:30 AM 2 comments: Links to this post

Smiles on the Way Home 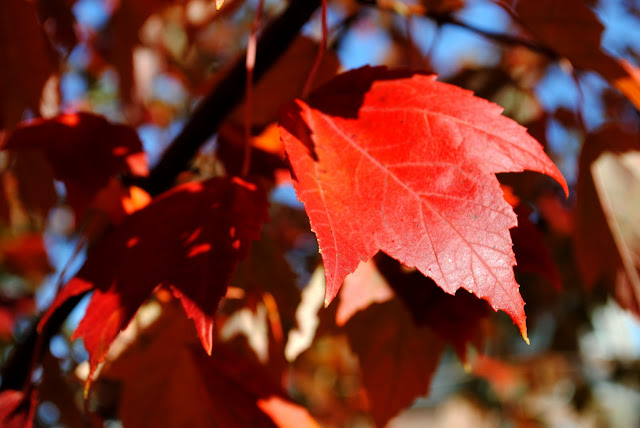 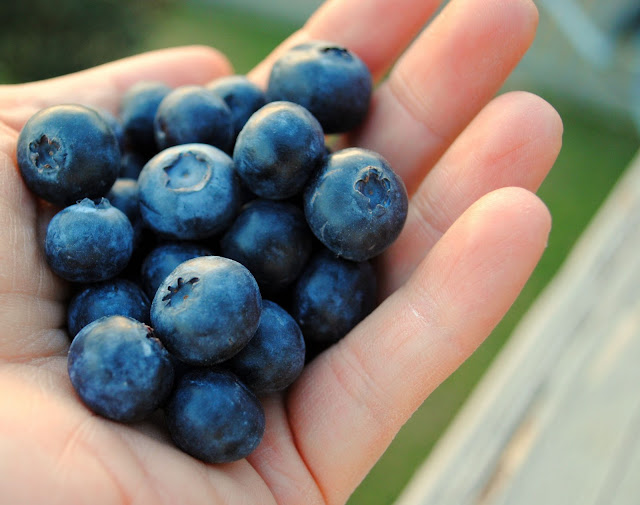 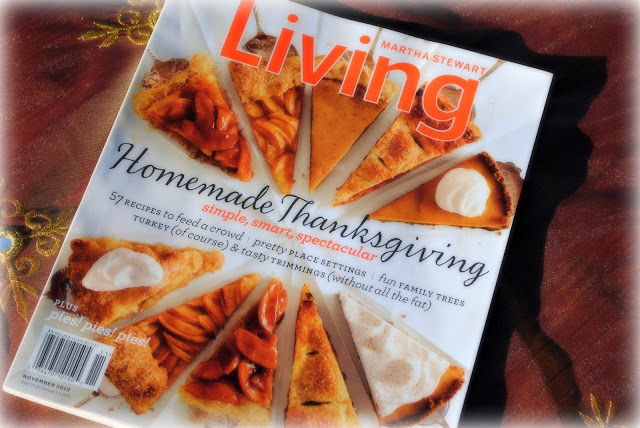 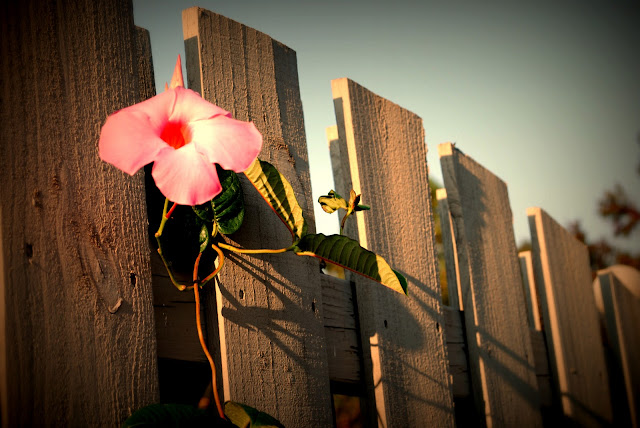 Posted by Shelley in SC at 3:50 PM 3 comments: Links to this post

Of all the varied members of our family, there are 2 that, at this point, lead unfair lives. 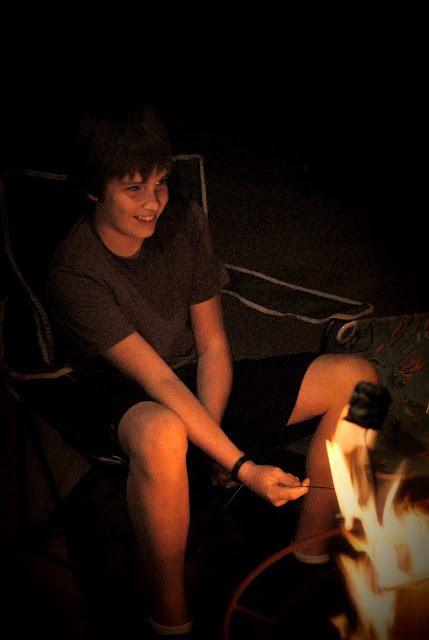 This has unfortunately led to their being dragged from pillar to post . . . or, more accurately, from one sporting venue to another. 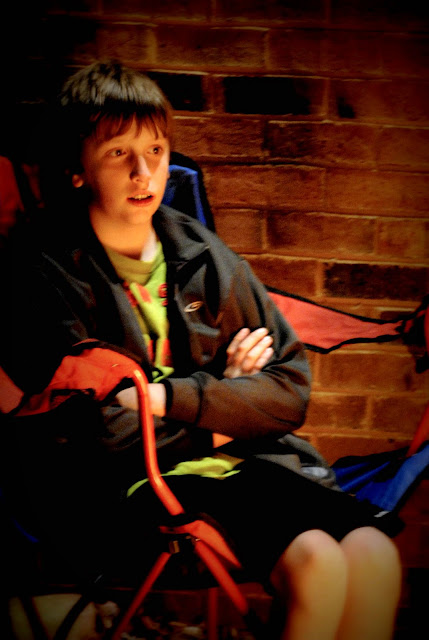 And this is unfair because, at this point, these two couldn't give a rippin' flip about sports.  They've got their interests, all right, but they don't involve either a round ball or a ref's shrill whistle or a driving spirit of competition.

So on Friday, when The Man of the House left to coach and Oldest Son left to dribble and drive and dunk and Oldest Sister left to keep stats in the score book, I stayed home to make a fire in the fire pit, invite a few  friends, and make it their night.

Actually, Middle Son made a fire . . . a roaring fire . . . something of which I am not yet capable. 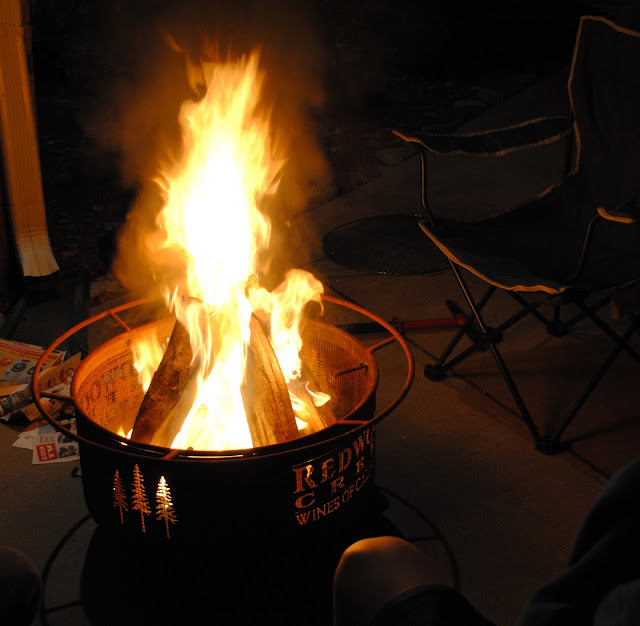 and all the necessaries were added to complete the picture. 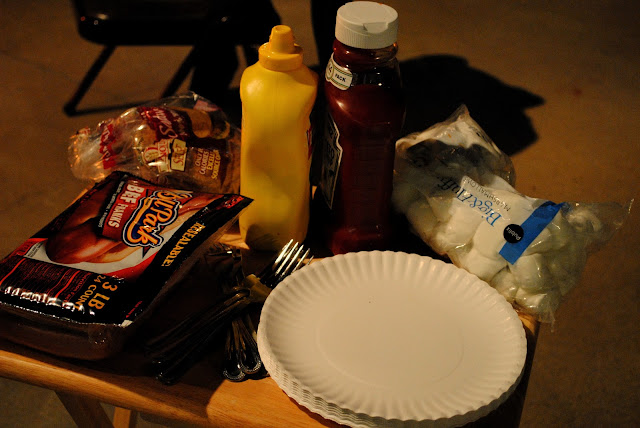 Roasted hot dogs and marshmallows disappeared at an alarming rate.

And then, boys being boys, they began to also roast marshmallows covered in ketchup, cheddar goldfish, and, amazingly, fruit snacks. 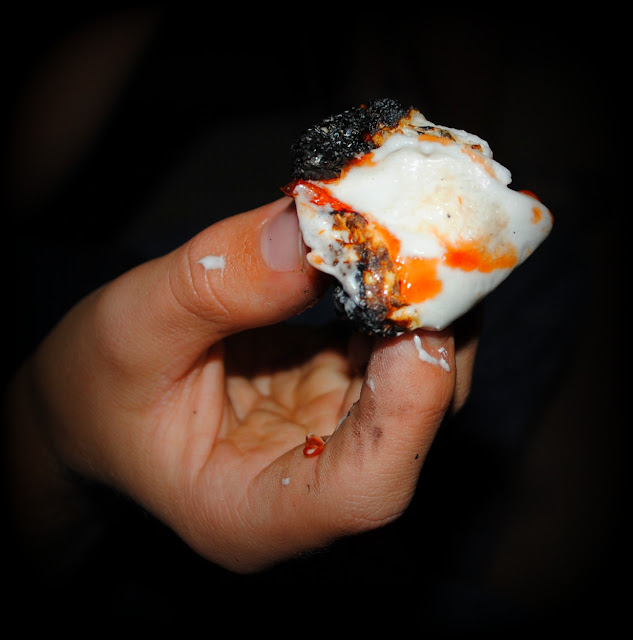 None were considered a rousing hit, until one of them was inspired to try roasting an apple. 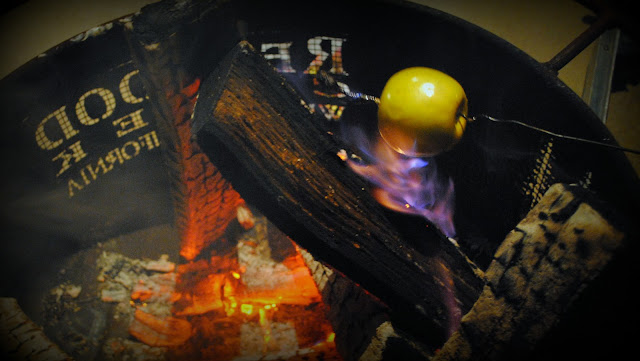 The apples sizzled and sputtered and the skin blackened to a silky charcoal.  Then the apples were cooled and the charcoaled skin was peeled off.  And to their delight, inside they found a most delicious baked apple which they devoured in large mouthfuls.

May I please add that it did my heart no end of good when Middle Son (who has been known to favor Vienna sausages, American cheese, and fast food french fries) declared that it was the most delicious snack he had ever yet been privileged to partake of. 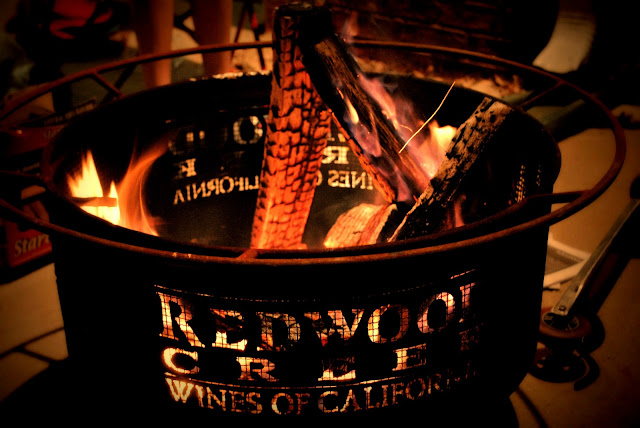 There was lots of laughter, a few crazy competitions of their own, and a few too many marshmallows.

For those of you who are wondering why I never mentioned Youngest Daughter . . . wondering whether she fits into the "sports-addicted" category or "poor-child-living-an unfair-life" category. 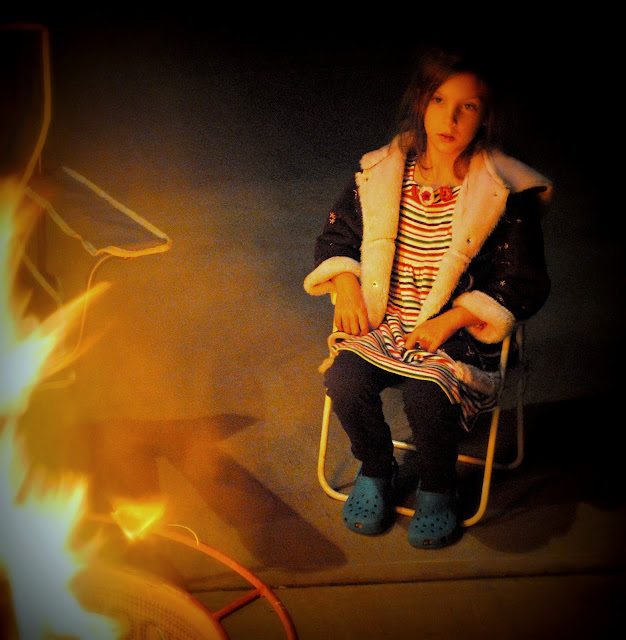 Let me just say that at this point she plays no sports.  But after observing her for the past 7 years, as adored baby girl of the family, I will also say that nothing about this child's life could remotely be considered "unfair."

Just saying.
Posted by Shelley in SC at 2:38 PM 4 comments: Links to this post

A Childhood Fantasy Bites the Dust

Posted by Shelley in SC at 9:06 PM 7 comments: Links to this post

I know teaching your kids at home has some downsides.  This is earth and this is life and nothing is perfect.

But this is not one of the downsides. 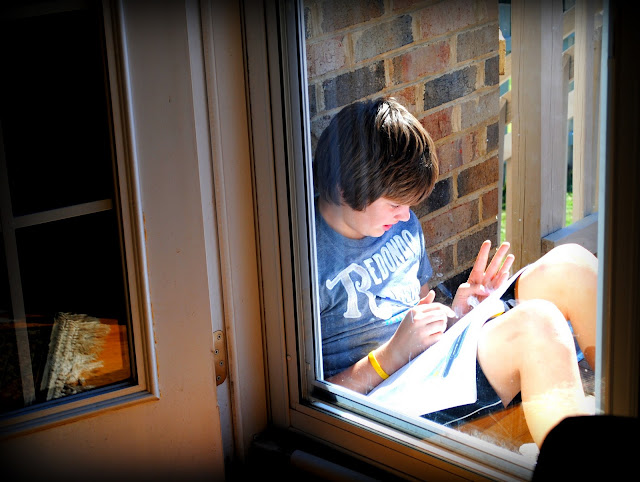 This kid who can't sit still, who wants to live on his BMX bike, who hates working at a table, who rides scooters and makes up games for the 5 year-old twin boys next door, whose legs bounce up and down while I teach him his history, who wakes up in the morning just counting the hours until he can get outside and run, run, run with his friends . . . 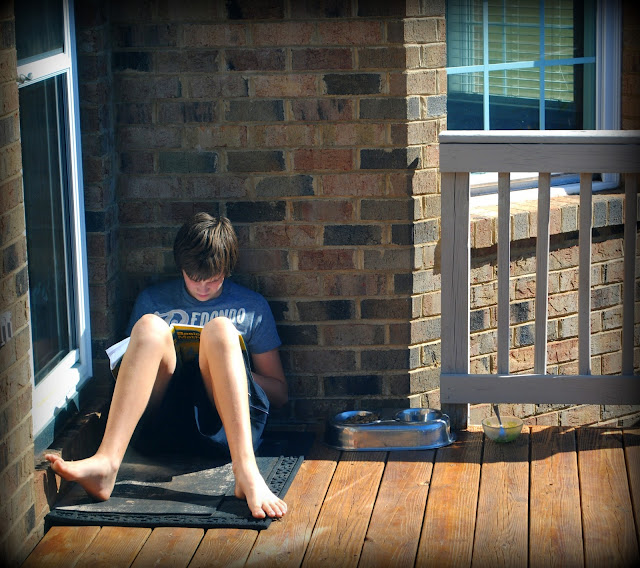 This kid gets to do his homework outside, with the sunshine streaming down on him and the wind riffling his hair and the dogs running up and down the deck stairs, checking on and nuzzling him.  (And yes, that's his cereal bowl next to the dog food bowl ::sigh::)

And for him, schooling at home is nothing short of a daily gift.

Wait . . . is that Middle Son doing his math on his fingers up above?  Must've learned math from his mother.

A Ritual of the Most Delightful Kind 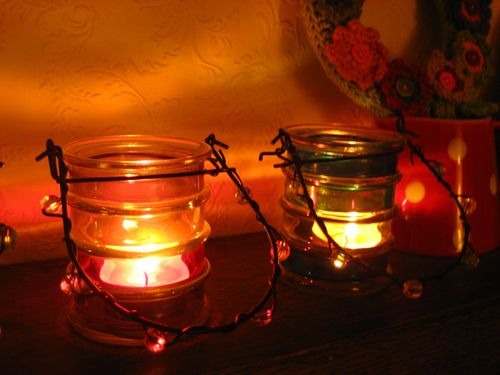 ﻿﻿
photo from Attic 24
This weekend we gained a delightful hour of sleep.  Of course, it just wouldn't be normal if I didn't also stay up an extra hour later to completely rob myself of that delightful hour.  ::sigh::

And so now the dark nights of fall and winter are coming even earlier, sending my playing children scurrying for home before I've even put pots to the fire and whisked up their dinner.


I would love for my home to be a warm and light refuge from the dark night.  And the adorable Lucy from Attic 24 has given me a delightful idea.  That's her picture up above.  Aren't the votives charming and inviting?  She says, "My evening ritual of lighting the candles . . ."
What a lovely evening ritual.  How warming for my family to pop their heads in the door and see candlelight glowing here and there around the house.
I think today I'll scrounge around and see if I can find some little votives for my own evening ritual . . . little pieces of warmth and light throughout the house to chase away the darkness.
Posted by Shelley in SC at 7:39 AM 4 comments: Links to this post 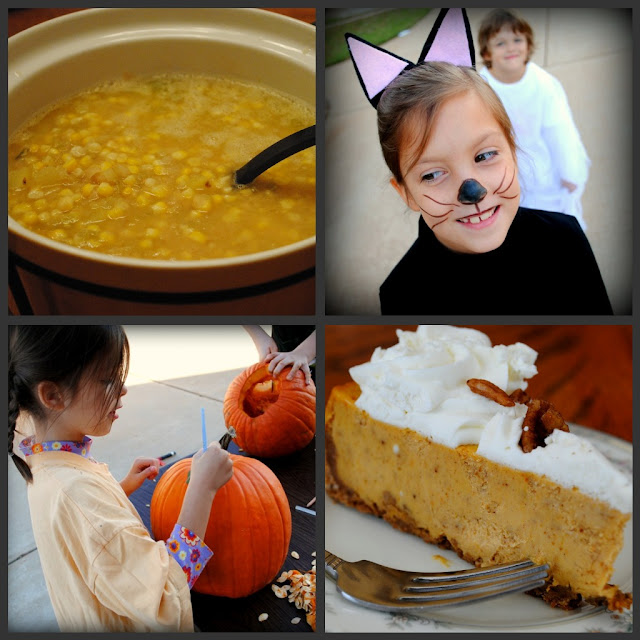 It happened quite out of the blue.

Last weekend we were wearing shorts and flip flops, with our hair tied back in ponytails, thinking smugly of relatives in Minnesota that were seeing snow outside their windows.

And then this week Fall swept in with a determination that shows she's here to stay.  Overcast skies, wet breezes that chill the bones, the smell of fireplace fires in the air.

And I'm feeling fall-ish . . . a most wonderful kind of feeling.

All of a sudden I found myself cooking creamy corn chowder, children were carving pumpkins, and dressing up as a frisky black cat, and I had a slice of a most delicious pumpkin cheesecake.

Fall is here, and, as usual, I find myself enchanted!
Posted by Shelley in SC at 6:58 AM 3 comments: Links to this post

Posted by Shelley in SC at 5:11 PM 4 comments: Links to this post