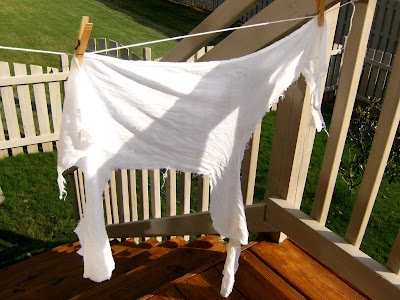 This ripped and shredded dish cloth is what I found on Middle Son's desk. A craft project? An act of frustrated dish drying? An attempt at clothing construction? No. Let me back up and explain.

There is a new craze going on in our house. It's sleight of hand . . . it's the art of illusion . . . it's magic tricks!! I think every boy probably has had a small interest in "magic" as he has journeyed from toddler to adulthood. But in our house it has become a craze, a passion, a career for Middle Son. Actually, the Man of the House and I are quite relieved. If Middle Son is to become a street magician, we can take the money from his college fund and begin using it for the groceries that he is downing at an alarming rate.

It started out as rubber band tricks . . . rubber bands magically moving from one finger to the other, knotting, unknotting. Very cool!

Then it moved to coin tricks and on to card tricks. I have to admit, I was (and still am!) impressed. He can do some great tricks.

There were a terrifying few days where he was into lighter tricks. Hmmm, burning lighters being flipped in the air by a 13 year-old . . . no.

The tricks have now moved on to illusions involving things like multiplying sponge balls and disappearing, reappearing, and changing pieces of fabric. This presents a greater challenge for Middle Son. Whereas rubber bands, coins, and cards were readily available, the props for the ever-growing list of new tricks is a little harder to come by.


Which brings me to the picture above. In its former life, this cloth was an excellent all-cotton drying cloth, the kind that your grandma had, the kind that can dry a whole drainer full of drippy dishes without blinking. Yes, it had a worn hole and a few slight stains. But, still, it was one of my favorite drying cloths. I found it, in the condition shown, on Middle Son's desk.

While still emotionally adjusting to the kidnapping of my favorite kitchen towel, I came upon this: 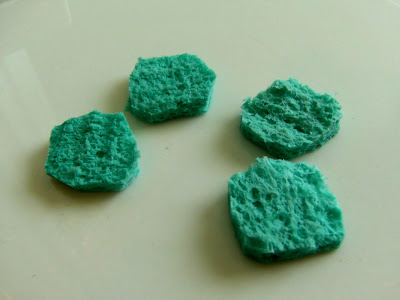 In its former, useful life, it was this: 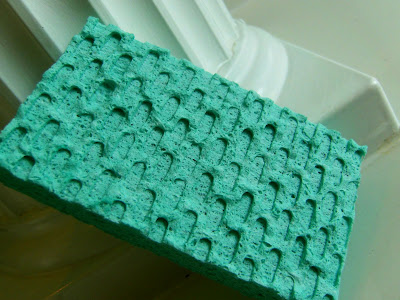 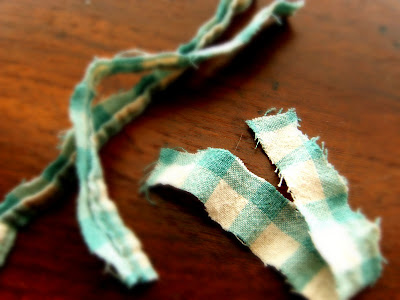 At this point, I was beginning to catch on. Magic props were needed, and my kitchen drawers had become the supply closet. I happened to be able to tell from these little scraps that they, in a former life, were the edges of a rather nice cloth napkin like this: 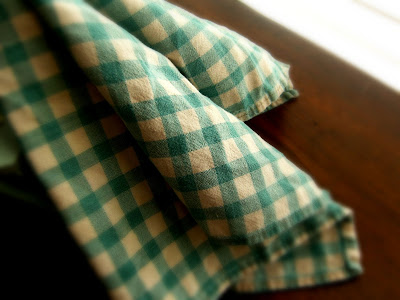 Nothing great, but I use them regularly to line bread baskets, etc. I didn't get much help when questioning the children. There were some wildly rolling eyes, pointing fingers, and it sounded like someone muttered "magic trick," but I couldn't be sure.

So, I'm wondering, what's next? When Middle Son discovers that real magicians favor silk cloths, will he head to my closet? When he's ready to pull things out of hats, will the neighbor's rabbit be safe. And, come to think of it, what should I expect when he's ready to practice sawing the lady in half???
Posted by Shelley in SC at 10:00 AM