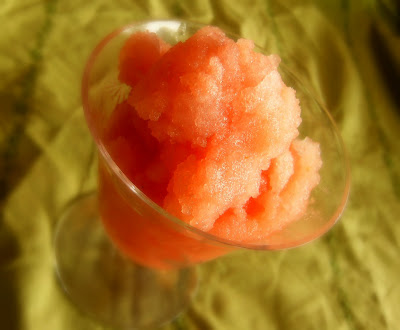 The recipe had been calling to me for weeks. "Watermelon Sorbet." Those two words said everything that I thought needed to be said at the end of a meal on a warm summer evening. What a way to end the summer . . . with a delicious watermelon sorbet. Sweet, frosty, mellow. Goodbye Summer, you've been wonderful!
The recipe promised "delightful flavor and texture." "Family Favorite!" it crowed.

So I planned for this pièce de résistance that was going to delight my family. Picked the watermelon. Picked the evening. Picked the meal.

When I sliced open the watermelon, it was end-of-season pink, instead of the full-bodied red I was dreaming of. Oh, well, nothing a little extra sugar couldn't cure.

I made the sugar-water syrup, chopped the watermelon, added the lime juice, processed in batches in the blender, chilled 2 hours. And then slipped it into its icy metal home to be made into sorbet.
Ten minutes after starting up the ice cream maker, there was a distinctive thudding sound, instead of the placid swishing I was looking for. I peeped in and found the whole substance to have become a stiff mass, clinging to the paddle, like so many chickens backed up against the hen house in the face of an oncoming storm. Thump, thump, thump, it clunked around.

I rescued the mass from its dizzying revolutions. It promptly separated into a thin, watery liquid and sharp icy crystals. I chopped, refroze, chiseled, scraped, and by the end of dinner I served what was to be my signature "farewell to summer."

"I'll pass," said the Man of the House, who doesn't care particularly for watermelon even in its native form.

"Watery," declared one of the 5 food critics at the table.
"Too lime-y," said the another who had questioned the addition of that ingredient from the beginning.
"Icky," piped up the third, apologetically.
"Delectable," said Oldest Son, clearly wanting to escape dish duty for the night.
"Delectable?"
He consulted his I-pod and its link to the online thesaurus.

"Good!" said Youngest Daughter, dreamily, delighted by anything in which she could find a pure, source of sugar.

Ah, yes, goodbye, Summer. We've loved you. And now we send you off with a less-than-rousing farewell.

So, what to do with a half-gallon container of rock solid watermelon ice? Partially thaw and reblend.
Watermelon slushies, anyone??
Posted by Shelley in SC at 11:26 PM