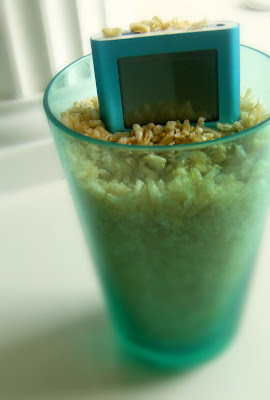 Some families just shouldn't own technology.
Actually, if you have to call the blog about your life and your family "Living with Imperfection," that is probably a very big indication that your family and technology are not a match made in heaven.
Our family's start down the slippery slope of technology mishaps and mayhem started with Oldest Son riding to the pool with his cell phone in his bathing suit pocket, joyfully flinging off his tee-shirt, and hurling his body into the pool. Mid-hurl, he remembered. The cell phone. In pocket. But there was nothing to do. Bodies cannot reverse direction while mid-air. So, long, cell phone. One down.

The next event involved Middle Son. He was fishing and had a brand new, much beloved cell phone. No way was this phone going to be damaged. He carefully removed his shoes and gently placed the phone down inside. That should be safe. Yes, it should be, but he did not take into account his friend exuberantly spinning around and mistakenly giving the shoe a hard kick . . . right into the lake. Gurgle. Goodbye, much-beloved-birthday-present cell phone. Two down.

Luckily for Middle Son, the Man of the House was able to give him an old, used replacement phone. However, two days later, Middle Son was having great fun with a friend, a hose, and a trampoline. He had learned his lesson. There was no way this phone was getting even slightly damp! He ran out to the driveway---far, far away from the hose---and laid the phone gently on the hood of the car. Nowhere even near the hose. Totally safe. So, how was I to know, when I scurried out to the car to go meet a friend for coffee, that a cell phone was on my hood? By the time I got the call that I had left the house with a technological stowaway on my hood, I was 10 miles away sipping coffee at Panera, and the cell phone was gone. We combed the route from Panera to home to Panera to home looking for the phone. I cannot even tell you how much aluminum cans and empty cigarette packages catching the light of the sun look like cell phones from the window of a car. Please forgive me, old, used replacement cell phone, but you seem to have evaporated. Three down.

Things come in three's, right? We should have been done at this point. But technology living in our home scoffs at "three's."

Youngest Son has an Ipod, a beautiful, shiny turquoise Ipod. Youngest Son is like the Man of the House. He takes very good care of his things. Nothing would likely happen to this prized piece of technology. And nothing would have . . . if he lived all by himself. But he doesn't. Youngest Daughter saw the Ipod sitting on my desk. Something was not quite right. Was that a sticky smudge on it? Well, let's take care of that. She scooped up the Ipod, headed to the sink, and when Oldest Son found her, the Ipod was lathered up, water flowing over it, bubbles of soap slipping down its sides, happy smile on her face. She was helping out. So sorry, glowing turquoise Ipod. (The picture above shows the Ipod reposing in its "rice therapy," the rice earnestly trying to draw out all the corroding water in the Ipod . . . and failing miserably.) Four down.
We're holding our breath. There are still multiple phones, several computers, Ipods, and even some old boomboxes that have escaped unscathed to this point. Who knows what disaster awaits them, secretly hiding behind life's corners.
Posted by Shelley in SC at 12:15 AM