We may not have many Christmas traditions, but at our house we do have a fun way to wrap up the Old Year.

It's the annual opening of the M family time capsule. 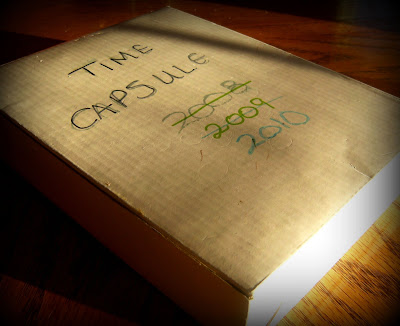 The New Year's Eve the year before we each fill out our Time Capsule form. We predict who will win the Super Bowl (no small chore for Youngest Daughter). We tell what our current biggest "pet peeve" is. We guess who will grow the most. And much more.

Then we seal up the hallowed time capsule and it sits moldering away, becoming fascinating, filled with unknown secrets on my closet shelf for a whole year.

The following New Year's Eve we open it up and have fun cheering those who made accurate predictions, measuring everyone to see who really did grow the most and laughing over who we were a year ago. 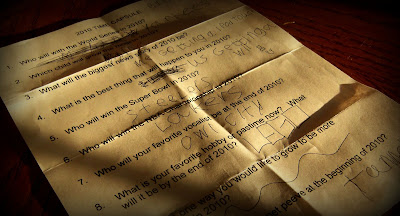 One child, not to be mentioned, thought the best thing that would happen to him in '09 would be the acquiring of a girlfriend. And the Man of the House had as his biggest wish a full night of uninterrupted sleep.

I think they're both still hoping.

I, for one, predicted that the best thing that would happen to me would be that I would knit my first pair of socks in '09. 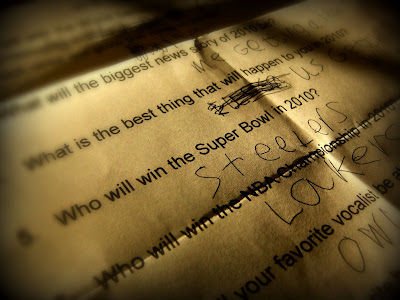 After our laughter and congratulations had subsided, we filled out our 2010 sheets, and once again sealed up the Time Capsule, ready for another unveiling on the eve of 2011.

And now '09 is over; the excitement of both Christmas and New Year's are done. And even this last weekend of the holidays is hours from being completed.

And now to Him who can keep you on your feet, standing tall
in His bright presence, fresh and celebrating---
to our One God, our only Savior, through Jesus Christ
our Master, be glory, majesty, strength and rule before all time,
and now, and to the end of all time. Yes!
Jude 1:24-25 (The Message)
Posted by Shelley in SC at 8:22 PM