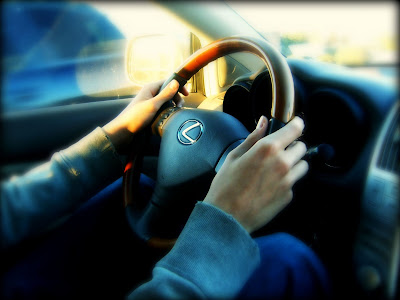 When Oldest Daughter turned 15, she announced with finality that she would NOT be getting her driving permit any time within the next decade.

I was delighted. One thing to cross off on my "Things To Worry About List." No teenaged driver in my home for a while.

When Oldest Daughter turned 16, she announced with finality that she would NOT be getting her driving permit . . . ever.

However, by the time Oldest Daughter turned 17, Oldest Son had turned 15 and had announced with finality that he would be getting his driving permit just as soon as he could talk me into getting him to the DMV.

And so as not to be left in the proverbial dust, Oldest Daughter decided that very day that she would also be getting her permit. 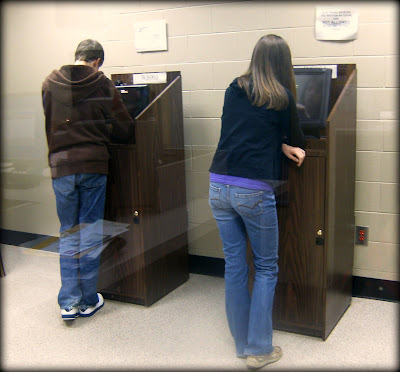 I smiled smugly. This parenting thing was working out like clockwork. Two kids learning to drive at the same time. Two birds with one stone. Easy-smeasy.

We did the requisite driving around the neighborhood. They missed all the mailboxes; they made perfect complete stops at the stop signs; they stayed within the 25 mph speed limit. They were adorable. Piece of cake.

It was time to start driving on the road. I, for my part, made a mental check of all the things I had observed in other mothers and that I would be avoiding: i.e., pointing out every little flaw, gasping around curves, hyperventilating, etc. I would, of course, show total confidence in the fabulous drivers I knew these two would be. If there ever was a cool mom, that would be me.
Oldest Son slid in the driver's seat, plugged in his Ipod, and we headed for the open road. Cool moms do not complain if their child's music is louder than they prefer. I was silent.

We cruised smoothly down the road. Great job. Up ahead I could see a car headed the same direction as we. I saw his brake lights come on. Our car did not slow down. We were now approaching quickly. I was cool. I was silent. I trusted my child's abilities.

When beads of sweat started appearing across my forehead, I finally spoke up, "Oldest Son! Put on the brakes!" We slowed . . . we stopped.
Oldest Son looked at me scathingly. I hadn't told him that he needed to look for people's brake lights to come on to tell him to slow down.

As in a dream, the terror rolled over me. What else did I think he knew that he didn't? What else would I forget to tell him ? What was I doing in the passenger seat with this mere kid . . . this maniac controlling a large motorized vehicle. This kid who had missed the memo about brake lights.
And in that one instant I became the most uncool mom there ever was in the passenger seat of a teen-driven car. I watched the road like a hawk. I mentioned every rule I could think of. I looked for bumps, pedestrians several streets over, stop signs two blocks away, and flashing blue lights in our back window.

We returned home with my nerves strained and mild heart palpitations. There on the front steps stood Oldest Daughter. "My turn now!" My lips stretched into a thin, tight smile. "Sure, honey!"

I immediately mentioned to her that she must look for brake lights in the cars ahead of her to warn her of their slowing down.
She gave me a sideways glance, eyelids half-closed. "No kidding, Mom." Ahem. We moved out onto the open road.

I never knew our roads were narrow. They're two-lane roads everywhere we go. One coming, one going. Oldest Daughter was terrified. The car seemed, to her, as wide as a HumVee. She clung nervously to the shoulder of the road. She knew she was poised to sideswipe oncoming traffic at any moment.
The problem with this was that I was in the passenger seat. I was right on the shoulder of the road . . . poised over ditches and dropoffs . . . the right shoulder of the road that in South Carolina has no gutter and no curb . . . the crumbly right shoulder of the road that butts right up to grass, mud, and the occasional clump of dandelions. The tires slid and spun, kicking up black chunks of asphalt and spewing mud and sod. The car lurched. I clung to the door handle. "Oldest Daughter, you're too close to the side of the road." Words squeezing out from my constricted throat.

And so it has gone. The mom who was going to be very calm, cool and collected is instead hyperactive, very uncool, and scattered. I have gasped; I have clutched; I have flinched; I have nit-picked; I have lectured; I have hyperventilated. And, please forgive me, but I have dug my nails into my son's leg and screamed at the top of my lungs as he slowly turned across oncoming traffic right . in . front . of . a . car.

You may have noticed I have not mentioned the Man of the House in this post. He will not, at this stage, get into the car with our teen drivers at the wheel. "Too stressful," he says, simply.
I guess my chest pains, neck rash, and twitch at the corner of my left eye may have tipped him off.
Posted by Shelley in SC at 10:29 PM