There's not much that is more full of promise, hope and expectation than nests in the spring!

The birds in our neighborhood seem to be quite challenged, however, in their building abilities, site selection and decisiveness.

For example, one bird worked away diligently in our zelcova tree and then later in the day, as Youngest Daughter and I walked under the tree, the nest came down with a plop right in front of us.  Back to Engineering 101 for that bird. 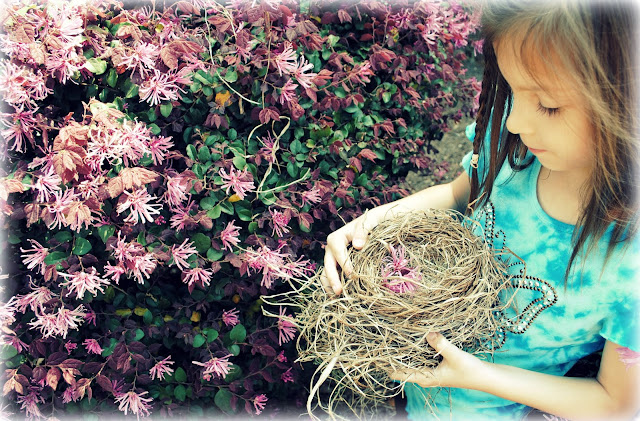 Youngest Daughter filled it with little pink flowers instead of the eggs for which it was meant.


And then you may remember the mourning dove that chose our hanging pansy planter in which to begin her nest and then left in a flurry of stress and distraction. 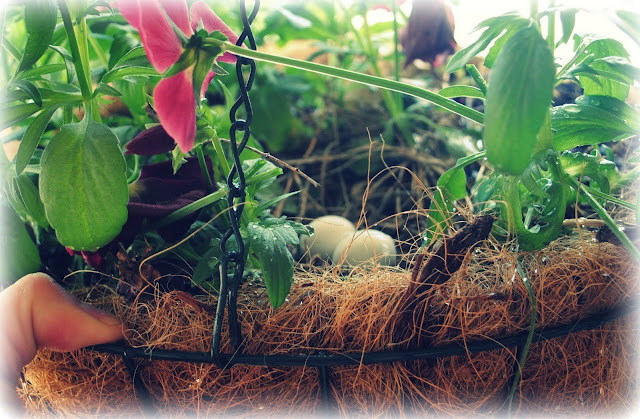 Well, apparently not having found any other spot to suit her completely, she is back and has laid 2 adorable eggs.  She's become used to children, dogs, and life going on just under the bottom of her basket.  Papa Bird, however, has not become accustomed and cannot reconcile himself to Mama's indecisiveness.  He sits up on the roof ledge just waiting for Mama to grow exasperated again, so he can say, "I told you so."  Humph.

And then there is the bird with the impaired site selection ability.  This bird chose, of all places, the 24' x 45' fenced area in which we keep our two large, boisterous, and bird-o-phobic dogs.  Somehow this bird built its nest within dog-reaching range and managed to get an egg laid before she realized that she must have had a migraine when choosing her location.  She abandoned her nest while her life was still her own. 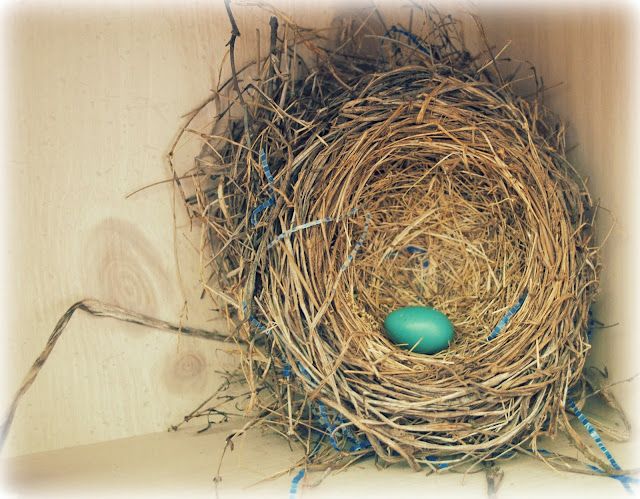 Youngest Daughter and I rescued it, and it sits on a shelf in her room, looking sweet and springy.  Just love those touches of blue the bird chose to weave in her nest!  Nest built right in the jaws of danger . . . but it sure was beautiful.