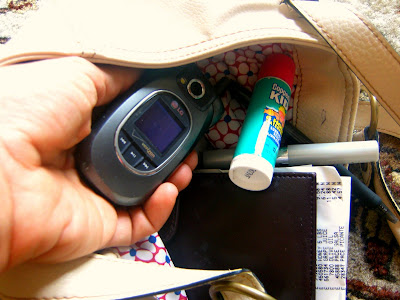 "Please silence your cell phones!"
It runs across the screen at the movie theater, it's announced at meetings and written on signs in my doctor's office. And I always respond, a little self-righteously, "Who are these yahoos who need to be told to silence their cell phones in a place where quiet is called for?"
Which brings me to this past Sunday morning. My wonderful pastor was preaching. He had our total attention. He is so gifted in making God's Word real and relevant, and we were all on the edge of our seats . . . taking it all in as he brought his message to a close.
When all of a sudden a cell phone went off.
A cell phone in the 3rd row.
A cell phone set on medium high.
A cell phone with a ring that could only be described as a dance tune.
A cell phone in my purse.
da-da-da-da-da (cha-cha) da-da-da-da-da-da-da
I flopped wildly over in my seat to grab the phone in my purse and silence it, of course signaling to the entire church who the cell phone offender was. I could feel my family withering with humiliation on both sides of me.
But where was the phone? In truth, I can't find my phone in my cavern of a purse on a good day; why should I be able to find it in church . . . on the third row . . . in a scene of meditative quiet.
Mad digging in purse. Empty Orbit gum pack . . . no. Super Aqueous contact solution . . . no. Aloe-based sunscreen, Colgate toothpaste, reminder card from the children's dentist . . . no, no, no. Oh, something hard and cold . . . no, that's my digital camera.
Mercifully, cell phones only ring so long, and then with an exaggerated "twang" they quit, letting you know you have missed your call . . . and letting the entire congregation know they can now return to listening to the pastor.
The call was from a friend. A friend who forgot I was in church. A friend who wanted to know if I would attend an event with her. A friend with whom I will not be attending any events for the rest of my life. Just kidding . . . just kidding!

Bless his heart, the pastor soldiered on, totally ignoring the interruption, as we all learned to do in Speech 101. No one said anything to me about it after the service. In fact, come to think of it, no one even made eye contact.
So, in answer to the question, "Who are those yahoos who need to be told to silence their cell phones in a place where quiet is called for?"
I reply with freshly aquired humility, "Those yahoos are me."
Posted by Shelley in SC at 10:25 PM