Yolla is leaving for Lebanon at the end of this week. ::sniff:: But not without a parting gift to me. Yolla announced last week that she would be teaching me to make tabbouleh. Not asked if I wanted to learn, mind you. Announced. And I loved it!

I was given a list of ingredients to have ready: 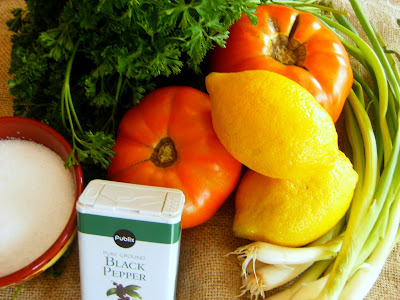 (oops, this picture should have some olive oil in it too!)

And when Yolla arrived at 1:30 p.m. on the appointed day, everything was waiting in readiness. I felt rather like a school child waiting for a home visit from her teacher. And maybe that's because all her life Yolla has been a teacher and a school administrator. Those kinds of people do tend to make me try to stand a little straighter.

Yolla surveyed my kitchen as an artist would someone else's studio. A swift glance around, and she was ready to take charge. She looked over my waiting ingredients and pronounced them good. Solid B+. She pushed up her sleeves and got to work.

"You have washed the parsley?" (insert strong Middle Eastern accent when Yolla is speaking)

"You have washed the onions and tomatoes?"

"Uhhhh, no, coming right up." Things were going downhill.

"You have a lemon juicer?"

"Uh, well, no." How could I tell her my fresh lemon juice usually comes out of a very large green bottle.

"You don't have a lemon juicer? Then you will show me how you plan to juice the lemon."
(Hands on hips . . . waiting.)

Fortunately I remembered a random cooking show where they showed you how to juice a lemon by cutting the lemon in half, holding the blade of the knife up against the flesh of the lemon, and squeezing the lemon so the juice drips down the blade. I performed this, all the while trying to appear confident.

I think I saw Yolla give a slight sniff.

Now, down to the business of chopping of the tomatoes and green onions. I scrambled to record the measurements as Yolla worked. 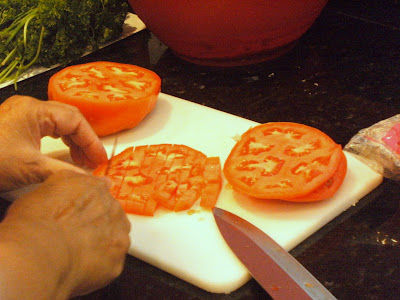 Next up, the highlight of the tabbouleh, the parsley. This was the tricky part, Yolla explained. She took each stalk individually . . . each stalk of 2 full bunches of parsley . . . and laid them in bundles for chopping. And then with a very practiced hand and with my sharpest, largest knife (that has been known to trim off the ends of thumbs and fingers with regularity) whizzed through all that parsley . . . left hand moving quickly back away from the knife, right hand chasing the left, chopping away with the knife, tiny specks of deep green parsley left in its wake. 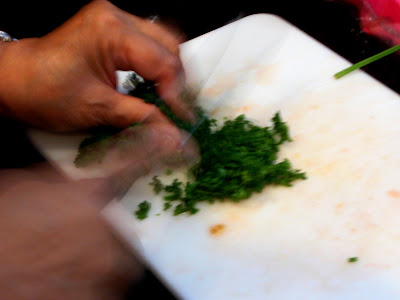 There is a reason I couldn't get a clear picture here. The hands were moving too fast.

Apparently the ability to finely chop parsley for tabbouleh was a prized skill back in Yolla's day. The finer the parsley, the more clever was said to be the girl. And, one can only imagine, more marriagable! Nowadays, we put a food processor on our wedding registry and call it a day. 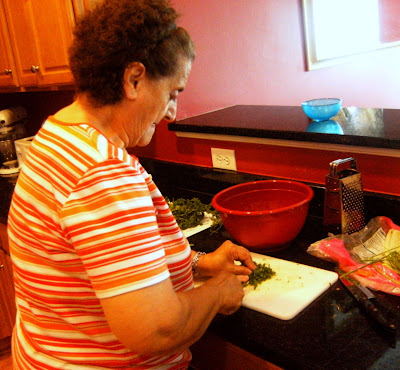 Yolla had brought her bag of bulghur wheat and added it in, along with the spices, juice, and oil. 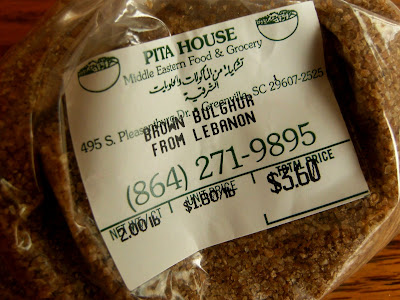 Then we stirred and got forks and tasted and tweaked and tasted. And oh, mmmmmmm, it was scrumptious!! We sat on the couch and I listened to stories of the Lebanese war and life in Beiruit. And I felt full body and soul. 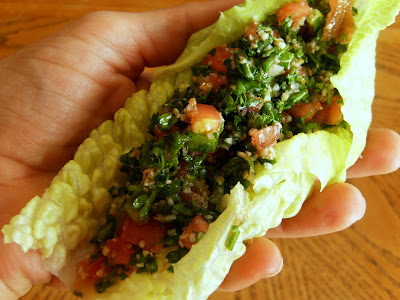 Oh, delicious, delicious tabbouleh. My family won't touch you with a 10-foot pole, so you're mine . . . all mine!!

Don't tell Yolla, but after she left I ate half the recipe on Tostitos tortilla chips. Somehow I don't think she'd approve.

Mix water and bulghur together in a large bowl. Chop tomatoes. Thinly slice green onions. Add to bulghur and stir well. Very finely chop 2 bunches parsley (not the stalks, just the leaves). Stir well again. Add remaining ingredients, stirring after each addition. Allow tabbouleh to sit for an hour so the bulghur can soak up the juices. Eat in romaine boats (Lebanese-style) or with tortilla chips or pita chips (American-style).